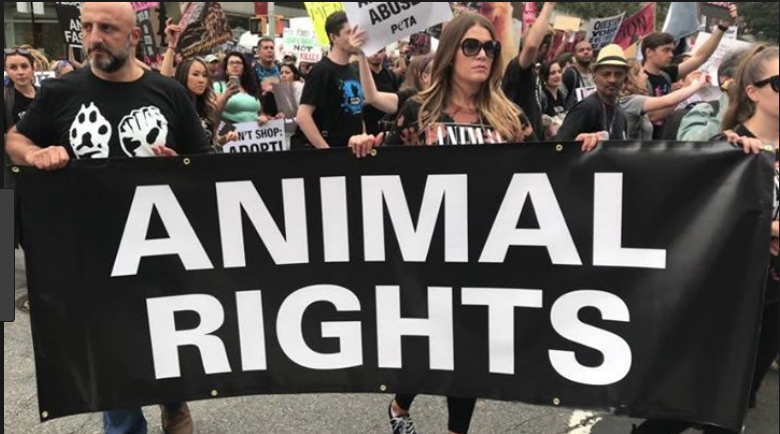 The Official Animal Rights March took place in cities across the globe this week. Founded by UK animal rights organization Surge activists are seeking to spread the message of animal liberation across the globe. The main march in London reported an attendance of 10,000 people this year.  It was the largest turnout since the march began in 2016 when 2,500 people took part. NYC was home to one of the largest sister marches, where vegans and, well, mostly vegans took to the streets to protest the cruelty to animals inherent in the factory farm food supply most Americans live on as well as abuses in other areas like entertainment (HorseracingWrongs.com) and research. March founders began this movement to inspire vegans to become active in this cause. And it is working.

From the ground, it was quite inspiring to see an entire crowd of people with no actual skin in the game, marching as allies for other living beings. Although animal rights may seem to many a low priority on the totem pole of what urgently needs defending these days, one particular marcher put it all into perspective. In short, the march is about countering inhumanity in all its forms.  There were graphic images on display of what animals are facing in the the factory farm system.  Given the rise of what's known as Ag Gag laws that seek to hide information about what exactly happens in slaughterhouses, large scale marches of this sort may be the only way to any garner media attention of these issues at all.

HF 589 (PDF), better known as the "Ag Gag" law, criminalizes investigative journalists and animal protection advocates who take entry-level jobs at factory farms in order to document the rampant food safety and animal welfare abuses within. In recent years, these undercover videos have spurred changes in our food system by showing consumers the disturbing truth about where most of today's meat, eggs, and dairy is produced. Undercover investigations have directly led to America's largest meat recalls, as well as to the closure of several slaughterhouses that had egregiously cruel animal handling practices. Iowa's Ag Gag law -- along with similar bills pending in other states -- illustrates just how desperate these industries are to keep this information from getting out.

Other information that corporations work hard to suppress was also freely distributed, including the bubble-bursting knowledge that  "Cage Free", "Grass Fed", and "Humane Certified" may not be as animal or environmentally friendly as some have been led to believe. (HumaneMyth.org)

The tens of thousands of people in the streets across this nation and across the globe did not get covered by mainstream or even 'mainstream-adjacent' news. Perhaps the ideas presented are considered too outside the mainstream? MSM loves to cover white supremacist rallies. Shouldn't white supremacy be 'outside the mainstream'?   More likely these alternative ideas are simply hostile to corporate sponsors. Or maybe a Kardasian chipped a nail. Either way, act.tv was there.

Watch act.tv's livestream coverage of the march and rally, here: