Nevertheless #ShePersisted: DC People's Filibuster Excoriates Kavanaugh on ALL of His Record 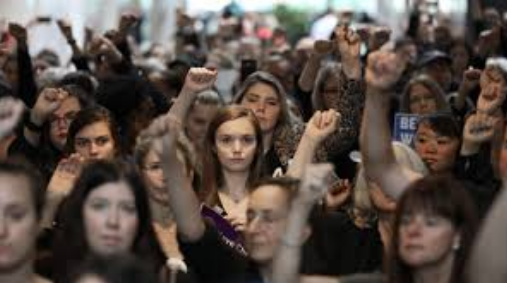 Rallies continue in DC to stop the nomination of Brett Kavanaugh to the Supreme Court.  It looks like rallies and the hope of media coverage of those events, are the only way to get the word out over the right wing talking points, and the corporate media's narrative on the left. This particular event had speakers lined up that, if they somehow got on Meet the Press, would blow Chuck Todd's mind.

Here's a brief summary of who said what:

Bob Wood, Title IX Coordinator, Gwynedd Mercy University, revealed his story of surviving sexual abuse for the 1st time, 57 years after he was assaulted as an 8 year old.  Maybe those who question why Ms. Blasey Ford waited 36 years to tell her story will better understand if the story comes from a man...

Ben Winkler, Washington Director, MoveOn.org said "The reason the right is now in the position where they can force Judge Kavanaugh onto the court is because they have been organizing for generations. The striking thing that happened in this fight is that our side is now fully awake. Our side is now fully energized. Our side will now fight every fight like this from here on forward; with all the energy, all the ferocity, all the commitment , and all the understanding of the stakes, that their side has used to get to this moment." As someone who covers protests, I see that same ferocity with my own eyes, but rarely do I see it reflected in the main stream press. Great to see that this is what Mr. Winkler sees as well.

Dianne Russell, organizer in Maine, said all hell will break loose in her state if Sen. Collins votes to confirm. They are mobilized and voters are active. I guess you can, get there from here.

This all happens in the first ten minutes. And it goes on. Act.tv was live there for Move.On. Watch the event in it's entirety here: