Climate Activists Are Protesting One Of Our Most Climate-Friendly Politicians. Now What? 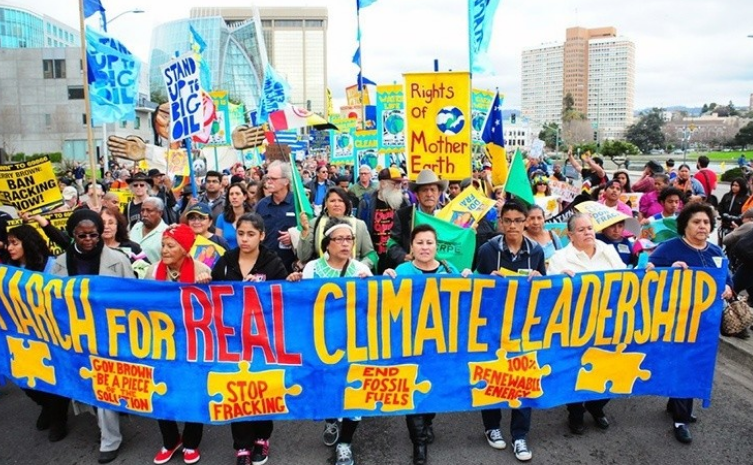 Governors, mayors and policy makers from around the world are gathering this week for the Global Climate Action Summit in California,  organized by California Governor Jerry Brown.  Brown has rejected Donald Trump's hideous record on climate and is using his considerable power as head of the world's 6th largest economy to push an aggressive climate change policy. One of the most outspoken elected officials in the country on the existential threat of climate change, Brown recently signed a new law to shift California to 100 percent carbon-free electricity by 2045. That's big. He also signed an executive order (B-55-18) committing California to total, economy-wide carbon neutrality by 2045. What? The 6th largest economy in the world is going carbon neutral? That's huge! Brown’s executive order would commit the state to doing something about issues beyond electricity, like transportation, building heating and cooling, industry, all the other energy services that rely on burning fossil fuels. Clearly Brown is trying to stem the use of fossil fuels by stemming the demand for them.

But he's taking a lot of flack for not addressing the supply side of the equation:

Throughout his most recent term, Governor Brown has ignored taxpayer-funded studies which show that oil drilling is toxic, and has refused to walk his own climate talk. During this time, we delivered over 500 hundred thousand petitions, rallied regularly at the capitol - and around the state, held numerous press conferences, hosted several health forums showing toxicity from drilling, and consistently reminded the governor that the majority of Californians and the science DO NOT favor fracking and dangerous drilling. Still, instead of standing with the people and the science, and taking on California’s powerful oil and gas industry to curb its expansion and most dangerous practices, Governor Brown has instead cultivated close ties to big oil and has taken its money, and cut industry-friendly deals around critical policy and regulatory issues.

Is attack a good strategy in this case? The protest certainly brings attention to where Governor Brown has failed to meet the will of a very well intentioned and well informed citizenry. And in that it is successful.  But it also makes the case that no good deed goes unpunished. Brown IS addressing parts of climate change. Compared to Alabama's Governor, Jerry Brown is a prince. The again, as hurricane Florence rams the east coast and category 5 typhoon Mangkhut is barreling into the Philippines with 200 mph gusts, powerful enough that "a Boeing 737 could lift off the ground without even igniting its twin engines", urgently addressing climate change on all fronts can't wait.  So where does that leave us?