Waves of Anti-Kavanaugh Protests Break Out In D.C. 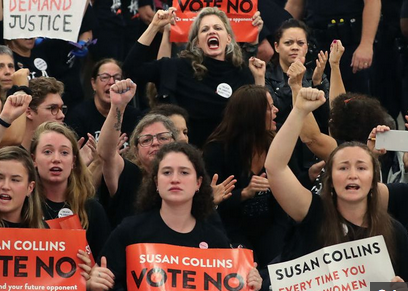 More accusations of sexual assault have been made against Supreme Court nominee Brett Kavanaugh and Republican's vow to 'push through' his nomination anyway. How rape-y of them.  Protests are breaking out in D.C. as well as other cities across the country.  Inside the Russell Senate office building, protestors gathered to speak out against the rushed confirmation process and against Kavanaugh himself as an unfit candidate for the supreme court. They are specifically working to pressure and encourage Republican lawmaker Susan Collins of Maine, Lisa Murkowski of Alaska and others who may not vote in lock step with their party's agenda, to reject Kavanaugh's confirmation.

Earlier today sexual assault survivors and their allies gathered on the Supreme Court steps to share their stories and detail how crucial it is that this man not get confirmed to the Supreme Court. Act.tv was live: