10,000 Anti-War Protesters Were Brutally Attacked By Police: They Also Stopped A War 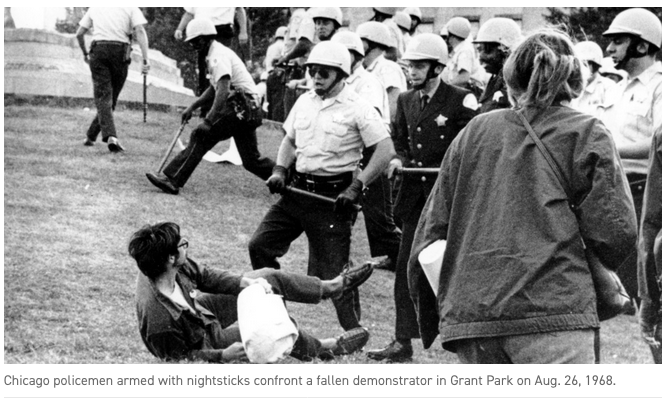 50 years ago today, the 1968 Democratic National Convention in Chicago saw upwards of 10,000 anti-war protesters come together to demand withdrawal of American troops from Vietnam. They were met by 24,000 club-wielding police officers, National Guardsmen and Army soldiers. That’s almost 2.5 police officers for every 1 peace activist. And it was all shown live on national television.

When was the last time you saw a major protest covered at length, much less live, on televised U.S. News?

The mainstream media barely covers protests or marches. Perhaps they are protecting America’s tender eyeballs from the bloody spectacle of live police brutality. Or maybe they are protecting their corporate sponsors from the decreased consumer interest in pro-biotic yogert which inevitably follows after watching civil unrest unfold in a public park. Or maybe NBC and CBS are seeking to protect mainstream America from dangerous thoughts like, for example, that there is a way to live in peace, with shared prosperity and justice in our country. Whatever the case, the lack of protest coverage subtly suggests to would-be activists that their movement is not newsworthy and that their efforts won’t make a difference.

Demonstrators often call for an immediate response to their demands. And they ought to even though they rarely get one.  I often hear marchers wonder aloud at the end of an event, if their action did anything at all. Let's remember that two years after the Chicago DNC protests, the newly elected President Richard Nixon began pulling US troops out of Vietnam. Why? Largely because there was increasing and vocal opposition to the war across America. The protests worked. It just took a while.

Austerity pushers, war-mongers, war profiteers, corporate fascists, religious zealots and other ne'er do wells in our body politic are playing the long game. They never stop their goosestepping toward destruction.  The forces for peace and justice too must keep the long game in mind.

Let's not let the lack of main stream media coverage of protests own the narrative. Protests are alive and well and working. They have been re-energized by the flagrancy of the Trump administration's running roughshod over all that's fair and good. Stay tuned for results.

act.tv brings the voice of the streets to the eyes and ears of America. Watch our live stream coverage of as many demonstrations as we can cover on Facebook and Twitter.